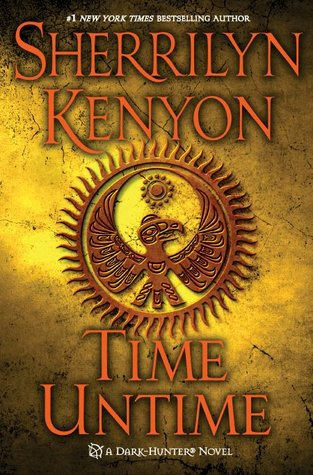 Kateri Avani has been plagued her entire life with dreams she doesn’t understand. Images of places she’s never been and of a man she’s never seen. Her quest for answers has driven her to Las Vegas where she hopes to finally silence the demons in her mind.
What she never anticipates is coming face to face with the warrior who has haunted her her entire life. One who belongs to a world the scientist in her refuses to believe is real.
Ren Waya came back from the dead to keep the prophecy he began from coming true and ending the world. For thousands of years, he has fought the same evil that once possessed him. But now that evil has found the one person he can’t fight. The one person who, against his will, holds the most sacred part of him.
His heart.
But if he doesn’t kill Kateri, the deadliest of evils will reemerge and destroy everyone else on the planet. It was a sacrifice he made once.
Will he be able to make it again?

This one for me is a VERY close second to Acheron for me. I LOVED it so much there was so much about it that I enjoyed. There were so many words of wisdom and there were heart wrenching moments and funny ones as well and I just love when we get to see so many of the other dark-hunters as well as Sasha (scooby) its like a little treat every time I read one of her books. I did miss my Simi though. But Nick made up for that ten-fold!!

“Ah, cher, that aint right. Laying lips on me to help another man out? Cold, cher, cold.”

I liked so much about this book it is hard to pick just one thing but if I have to I would have to say it is the epilogue!!! Cried like a baby! I loved learning about a different side, usually it is daimons but this one was more about spirits, Mayans, Keetoowah and their heritage as well as beliefs. I really enjoyed the different pace and I grew up in a Hispanic home so reading the spanglish in there just made me fall even more in love with it!

There was so much hurt, love, sadness, happiness, hate, and just heartache you wish you could take away from Ren because you wanted him to just feel LOVE.

I know for a friend of mine it struck a chord for her and this book will hold a special place in her heart because of the personal connection that she felt when reading it.

I have recently lost a friendship over something that I still to this day don’t understand, as well as some things that happened in my life growing up with family that were just more hurtful than I could explain to someone. So there were quite a few sentences in there that just stuck with me when I was reading:

And one I am sure everyone at one point in time in their lives can relate to:

“the harshest lessons come when we disappointing ourselves. When we put our trust and our hearts into the hands of the wrong person and they do us wrong. And while we may hate them for what they did, the one we hate most is ourselves for allowing them into our private circle”

Her books are always filled with so much greatness. Great story, great banter between the characters, great sadness/heartache, great love/happiness, great advice, great everything. I know I will always walk away after reading one of her books knowing I learned something and always feeling like I made a new friend then I have to remind myself they are not real haha. Even if it is a saying or quote that sticks with me (because in her books there is ALWAYS something to stick with you), I always enjoy a great author and she truly is one.

I went onto Sherrilyn Kenyon’s website because I had heard a while back that she was going to be making Chronicles of Nick into a movies.  I wanted to just check and see if she was still planning on doing it because I hadnt heard anything else about it. This is what I had found….. I cant wait until these come out!!

Amber Entertainment has signed a partnership with prolific paranormal novelist Sherrilyn Kenyon to develop and produce films, television and webisodes based on her books.

First project to be developed is “Chronicles of Nick,” based on the young adult series. In the first book, “Infinity,” 14-year-old Nick Gautier discovers that the football team has been turned into zombies, sets out to stop the attacks and learns he has a key role in an unseen world.

Kenyon will serve as producer alongside Ileen Maisel, founding partner of Amber.

“As a longtime fan of the films that both Ileen Maisel and Mark Ordesky have produced, I couldn’t be more excited,” Kenyon said. “I look forward to working with them to make my characters flesh-and-blood people.”

“We also discussed the DH TV series and who the best POV character would be for it. I don’t won’t to let too much out of the bag, but I will say this…

It’s going to be great. Again, I can’t imagine any fan not absolutely loving this. Imagine seeing the Peltiers and Sanctuary live (along with Ash and all the DH). Ileen and Lawrence really wowed me with their ideas and suggestions. And yes, we discussed casting and they suggested names that I feel will be incredible assets should we be able to get them.

That being said, here’s one teaser. The actor they want for Acheron… yes, he’s tall and he’s everything- E-V-E-R-Y-T-H-I-N-G- you dream of Ash being. Finger-crossed we can have him as Ash.

We are moving forward with everything and I will let all of you know as soon as I have more details. I can’t wait to share more!

I am so glad that I had come across these books! There are a lot of them and luckly on goodreads there is a list of the order including the short stories that go between.

Dark-Hunter – “In the world of the Dark-Hunters nothing is ever as it seems. Life  and death both take on a whole new meaning as this immortal cadre of  warriors fight to protect mankind from those creatures and demons who  would prey on us. It’s dark. It’s deadly and it’s a whole lot of fun and laughter.”

Dream-Hunter – “Sired by the gods of sleep, nightmares and dreams, we are the children of Mist.Traditionally called the Oneroi, we are what protect the humans,  Apollites, and immortals while they slumber. We are the Dream Warriors.  The ones who battle the Skoti Daimons and demons who drain the energy,  dreams and life from sleepers. ”

0.5) The Beginning – found in early editions of Sins of the Night and as a chapter in Acheron (Not needed to read first but it does explain how the Dark Hunters started…It is also in Acheron (bk 15) so you will get it eventually) 🙂

1.5) Dragonswan– found in In Other Worlds anthology

1.5) Knightly Dreams (Were-Hunter 1) found in In Other Worlds anthology

6.5) Winter Born – found in the Stroke of Midnight anthology

10.5) A Hard Day’s Night – found in the My Big Fat Supernatural Wedding anthology

10.5) Until Death We Do Part – found in the Love at First Bite anthology

13)Upon The Midnight Clear (Dream-Hunter 2)

15.5) Where Angels Fear to Tread – found in the Blood Lite anthology

15.5) Shadow of the Moon – found in Dead After Dark anthology

You can follower her on her:

Website – it is an awsome site she has pictures for the characters in her books!!!!

Here is the order to read the CON books. You can read them while you read the Dark-Hunter/Dream-Hunter/Were-Hunter books. But for me I liked reading them after I had finished and had caught up on all the ‘Hunter’ books. I do LOVE my Nicky!! He cracks me up along with the people he hangs around with. It also made me wonder as I was reading them how they mixed in with the ‘Hunter’ books if they did at all because in these things change, and work out different then how they are in the ‘Hunter’ series. Left me wondering how things will be played out and I am always excited when a new Nicky book comes out!

“At fourteen, Nick Gautier thinks he knows everything about the world around him. Streetwise, tough and savvy, his quick sarcasm is the stuff of legends. . .until the night when his best friends try to kill him. Saved by a mysterious warrior who has more fighting skills than Chuck Norris, Nick is sucked into the realm of the Dark-Hunters: immortal vampire slayers who risk everything to save humanity.”